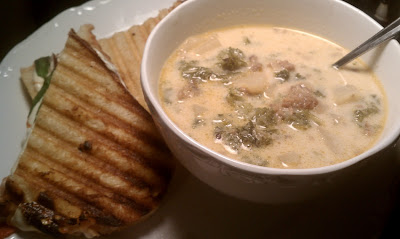 You know what one of my favorite things to do is?

Rip off recipes from restaurants.

Okay, perhaps I should say, recreate our favorite restaurant dishes at home.  That sounds so much nicer, eh?

I do love it, though.  Not only does it entail one of my favorite pastimes: kitchen experimentation, but it also means that I can schedule in that favorite dish when we really don't want to (or can't) spend the money at a restaurant.

When we go to Olive Garden, I would rather have the soup, salad and breadsticks than anything else on the menu.  I'm picky about pasta and pasta sauces.  And I refuse to spend upwards of $10 on something that I could make just as well, if not better, at home.  But the salad....well, who doesn't like Olive Garden's salad?  It's not fancy.  It's not gourmet.  It just tastes good.  The breadsticks?  They seem to be hit or miss. Even on bad days, though, they are just fine when dipped in the only soup that I ever request:  Zuppa Toscana. 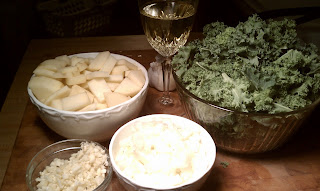 You know what I love about soup?  The best ones are uncomplicated.  Just a few ingredients that compliment each other.  This soup is no exception.  And there are few dishes more comforting than soup on a cold winter evening.
Let's get started.

I am trying to prepare mise en place this year.  There is nothing worse than watching something scorching as you are trying desperately to chop/wash/slice the next ingredient.  There are some meals that this becomes more important than others.  Whenever you find that you keep moving around the pot or pan until all the ingredients are in, that's a time when mise en place will help you not to lose your mind.  It's well worth washing a few extra dishes.  Here, I've chopped an onion, minced 6 cloves of garlic, peeled and sliced some potatoes, washed and torn some kale, and measured out some white wine.  It's all in its own container, and ready when I need it.  Now it's time to start cooking. 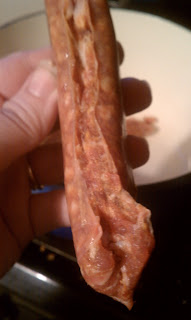 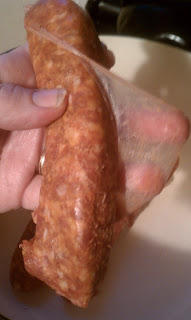 If you can find bulk hot Italian sausage, by all means, use it and skip this first step.  I usually just grab some at Meijer, and they rarely have the bulk stuff.  It's always in casings.  You need to get it out.  So use the tip of a sharp knife and make a slit down the length of the sausage. Peel the casing away.  It should come right off. 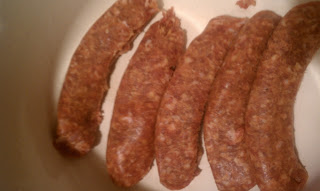 Then drop the sausages into a cold Dutch oven.  Turn the heat on medium and begin breaking them up with the edge of a spatula or spoon. 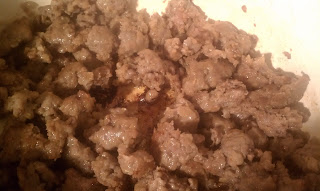 If you start with a cold pan and cook over medium or lower heat, it will tend to draw the fat away from the meat more effectively.  Just like you can keep the juices in meat by searing over high heat, you can also draw them out over lower heat.  This way, there is no need for additional oil to cook the meat.  If you find that your sausages are particularly lean, go ahead and add just enough olive oil to keep the meat from sticking.


Turn the heat down the lowest setting. Have a paper towel-covered plate ready, and scoop the browned meat out to drain with a slotted spoon. With additional paper towels, carefully blot the grease that is left in the pan.  Don't scrape, though.  You want all the browned bits to remain in the pan, since they will flavor the soup. 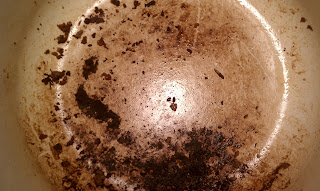 Now you can turn the heat back up to medium high and add a bit of olive oil to the pan.  It's time to saute the aromatics. 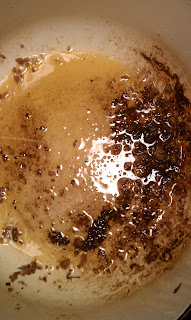 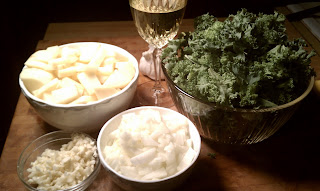 Remember this?  You now get to very calmly grab your bowl of chopped onion and drop it into the shimmering (not smoking) olive oil. Sprinkle a little Kosher salt over the onions and stir them around to coat in the oil.  It's okay to scrape the browned bits a little now, but they won't come up completely until you add the liquids.  Cook the onions, stirring occasionally, until they turn from white and crunchy like this...... 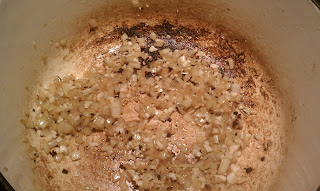 ....to soft and brown, like this.  That should take just a few minutes.  Now turn the heat up to high, add the garlic and stir it around for about 30 seconds, or until you can just smell it. 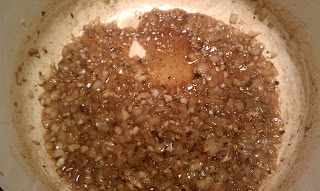 Now you can deglaze the pan with the wine.  Just toss it in there and start scraping the bottom of the pot.  I prefer to use a wooden spoon for this, since it is tough enough not to bend like a silicone spatula, but it won't damage the pot's surface the way metal could.  Once the pan is deglazed and the wine is somewhat evaporated, add the sausage back to the pan, and toss in the potatoes, as well.  Stir them around to combine. 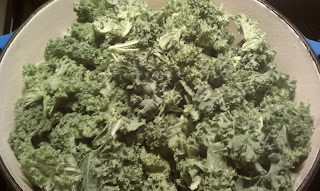 Go ahead and add the kale now.  It will look like way too much, but it's not.  It will soften and cook down.  I probably use more kale than Olive Garden does, but I probably also use more potatoes and sausage than Olive Garden does.  I'm not serving it as a brothy first course.  This is dinner.  So I like to make it hearty.  Oh, and don't be afraid of the kale.  Cooked, it really has a mild flavor.  It wilts a bit, but not so much that it loses it structure completely, as spinach would.  It really stands up for itself.  I love adding it to soups. 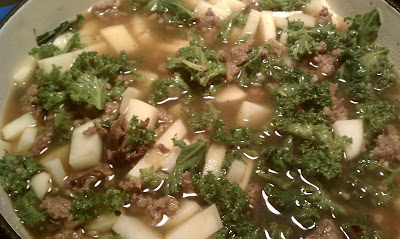 Finally, add the broth to the pot.  Sprinkle in the salt and pepper, and give it a good stir.  Cover the pot and bring the soup just to a boil.  Then turn the heat down and simmer for about 30 minutes.  If you want to make it a little earlier, you can let the soup simmer, covered, for a couple of hours.  Just don't add the potatoes or kale until about 45 minutes before you are ready to eat, or they will be overcooked and mushy. 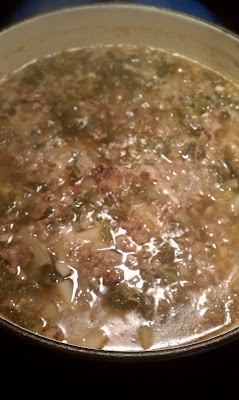 Now, you could just serve it this way.  It's perfectly delicious and hearty.  However, if you want the real deal, go ahead and pour in some cream and let it heat through. 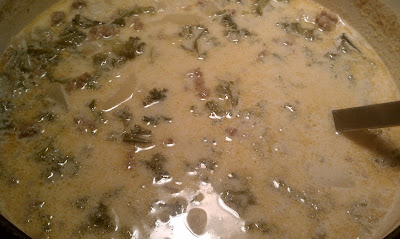 And this steaming pot of delicious is what you end up with.  Serve it with a green salad and breadsticks, if you like. 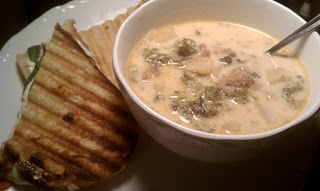 I served it with Caprese panini, but I have to say, it was total overkill and we ended up having the soup the next night.  It was my first time making the panini, and I didn't anticipate that it would be so filling.

Try it some time!