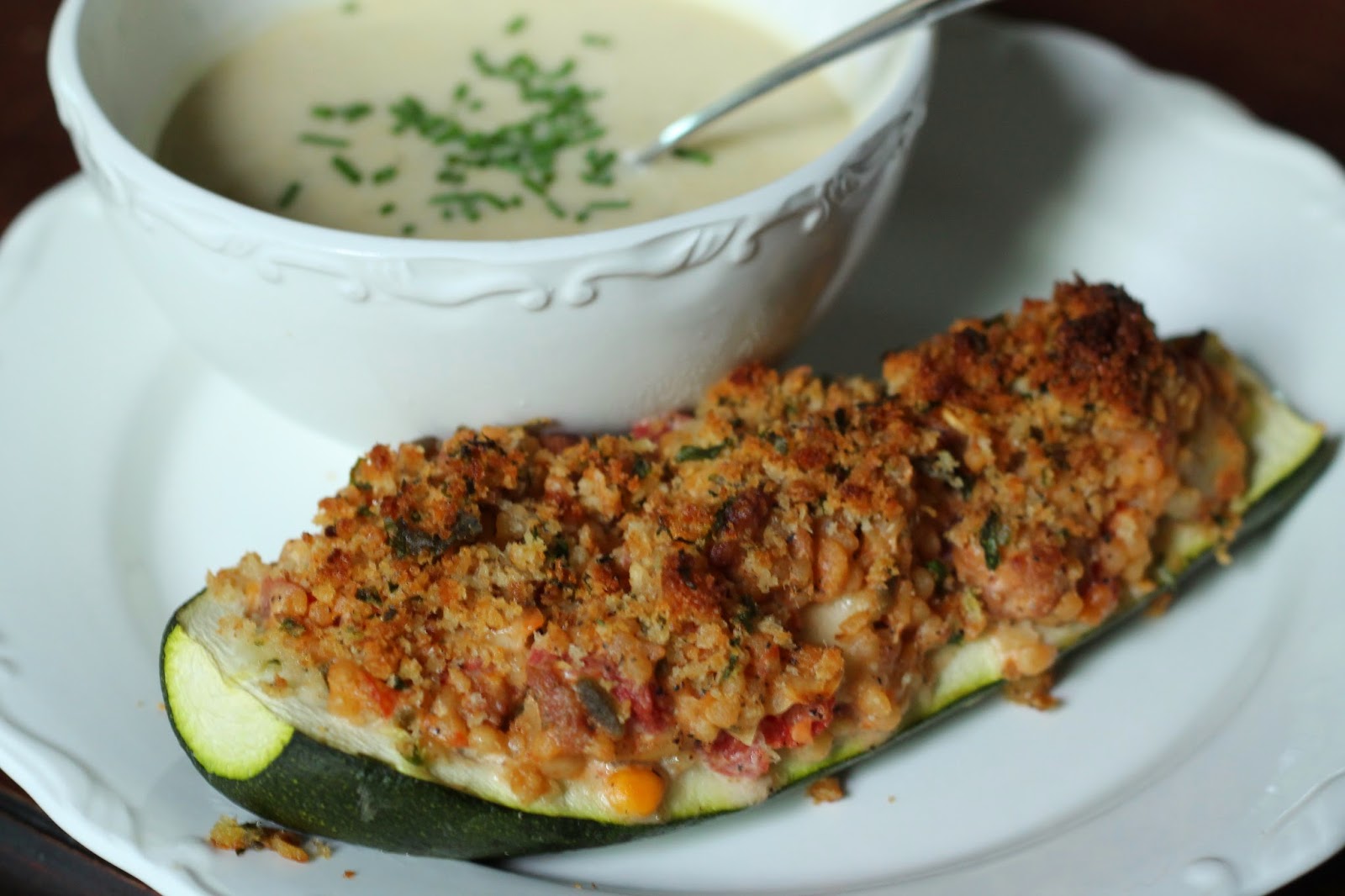 So, it turns out that the only thing harder than starting a blog is, well, re-starting a blog.  I just checked in, and I guess the last time that I posted anything was back in March.  Of 2013.  Oops.

Why?  Well, because as I think I have made clear in the past, I am not the most organized person.  I try, and I will eventually show you some of my better attempts. There has been a lot going on over the last year and a third, and some of it has involved improvements to our household organization.  However, it has come in bits and spurts, and managing to stop and take pictures of the progress, upload them, write about them, and put it all together in a fairly readable manner, has just not happened.

So I didn't know this, but having a child in middle school changes your life nearly as much as having a new baby does.  Crazy.  Suddenly, there was youth group, and Science Olympiad, and bowling, and cross country.  Suddenly, I understood the concept of the minivan mom.  Wow.  The spring of 2013 was just insane!  I couldn't wait for summer.

Then summer came, and with it, a new opportunity.  Through a series of events, our family began working the farmstand for a local farm at the outdoor market of the Downtown Market Grand Rapids.  We got up at 5 a.m. (the horror!) on Tuesdays and Saturdays, drove a big truck full of veggies and fruits downtown, and set up shop.  It has been so fun and rewarding, but also very busy! 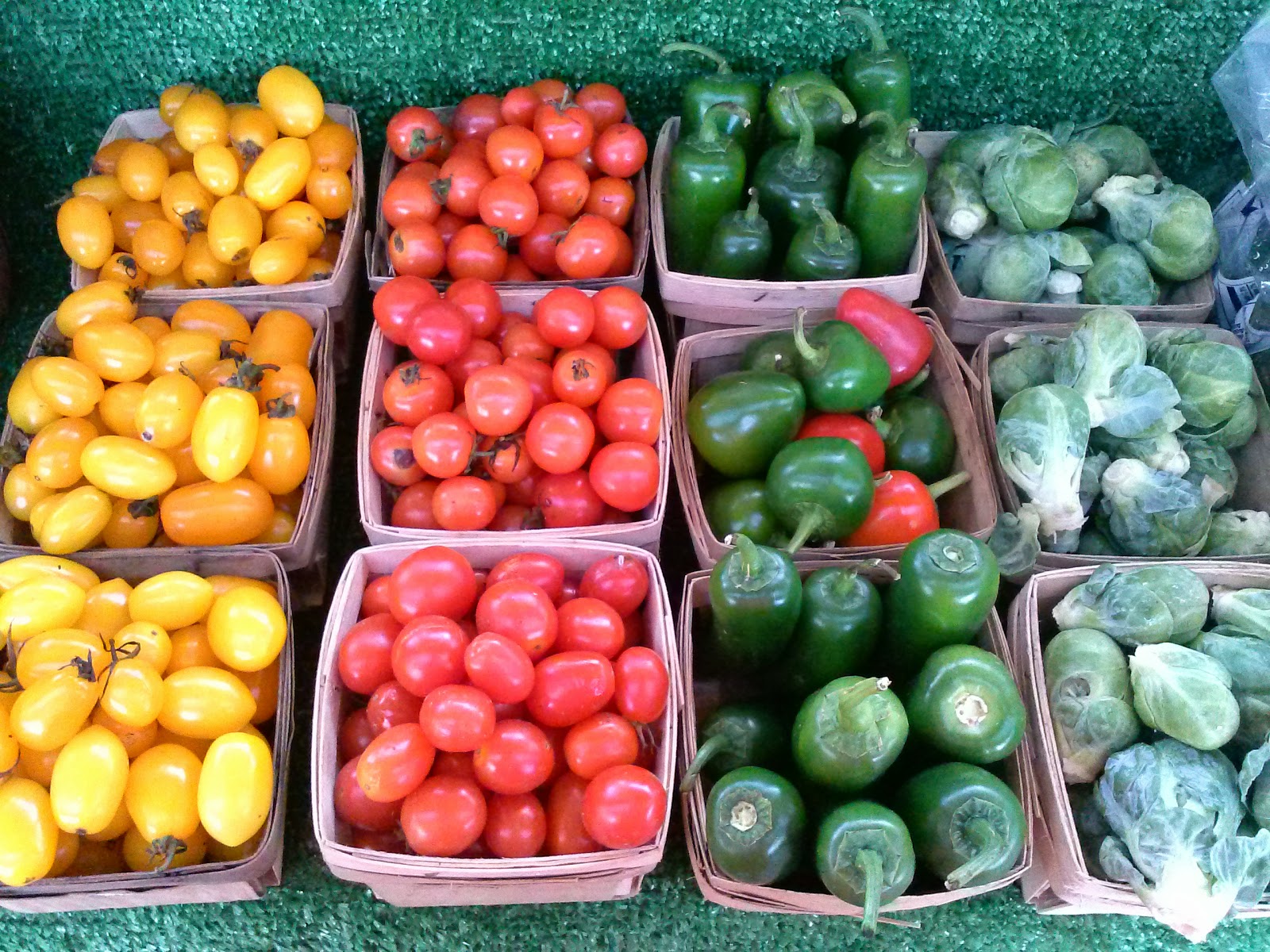 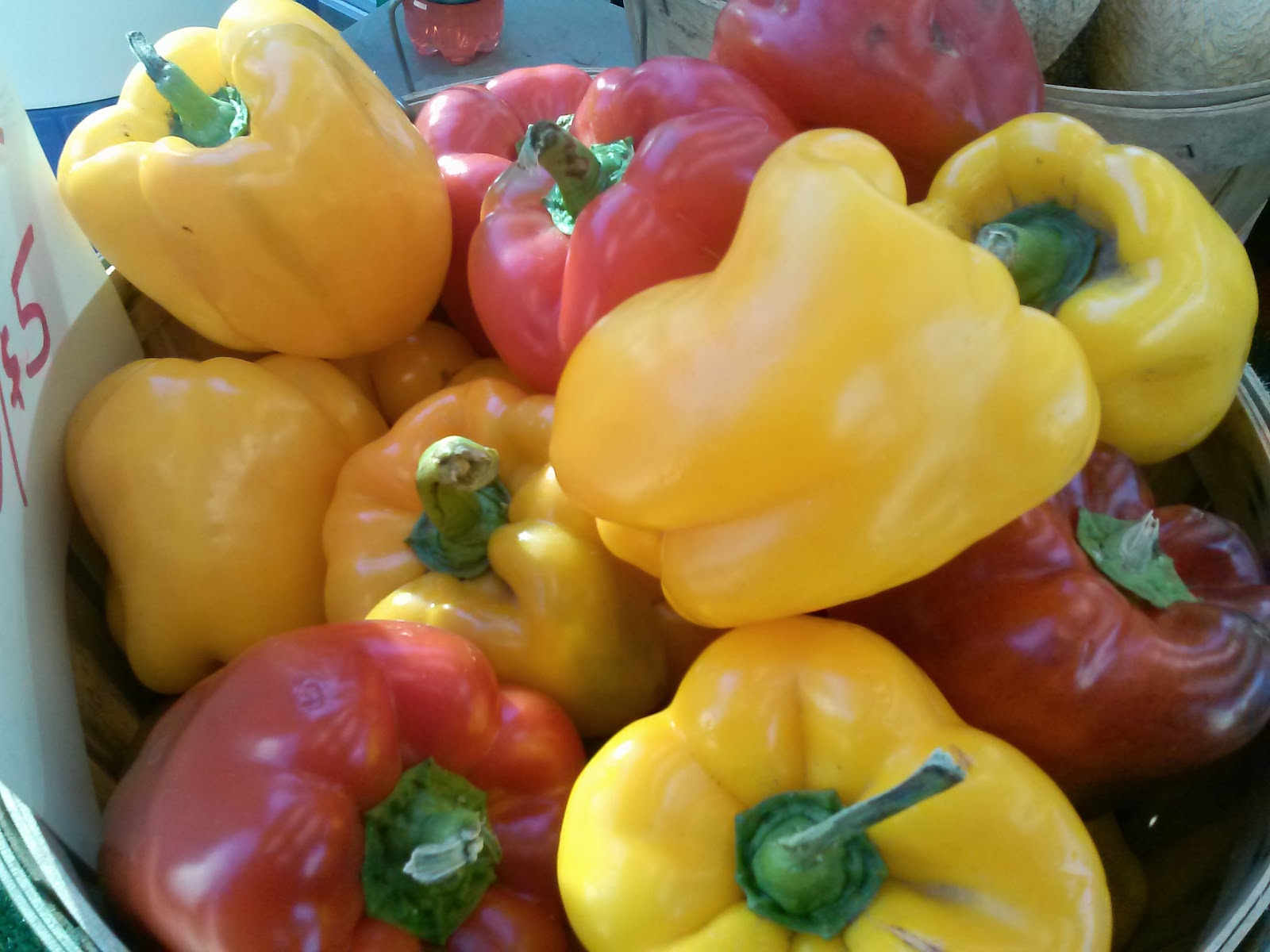 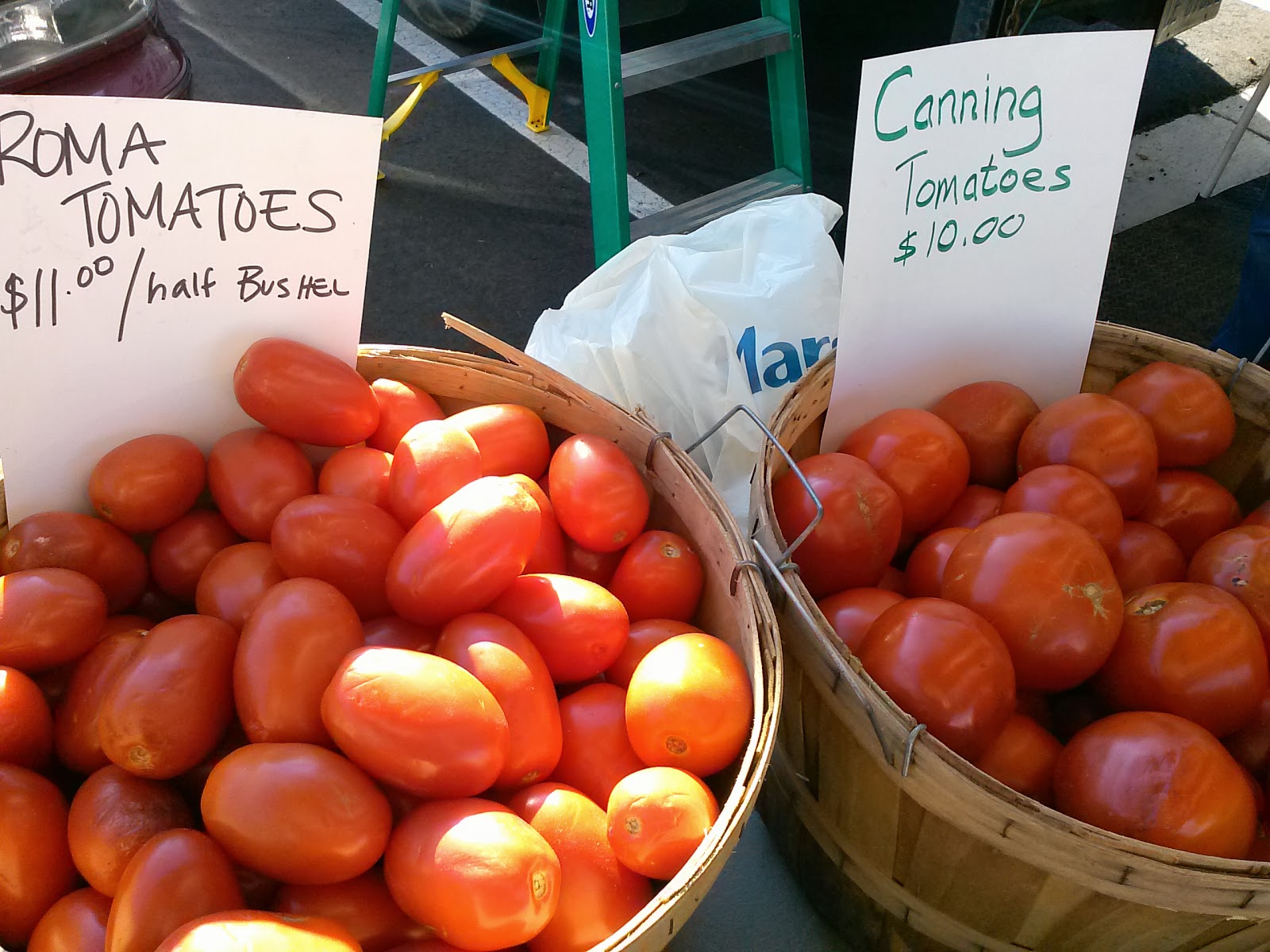 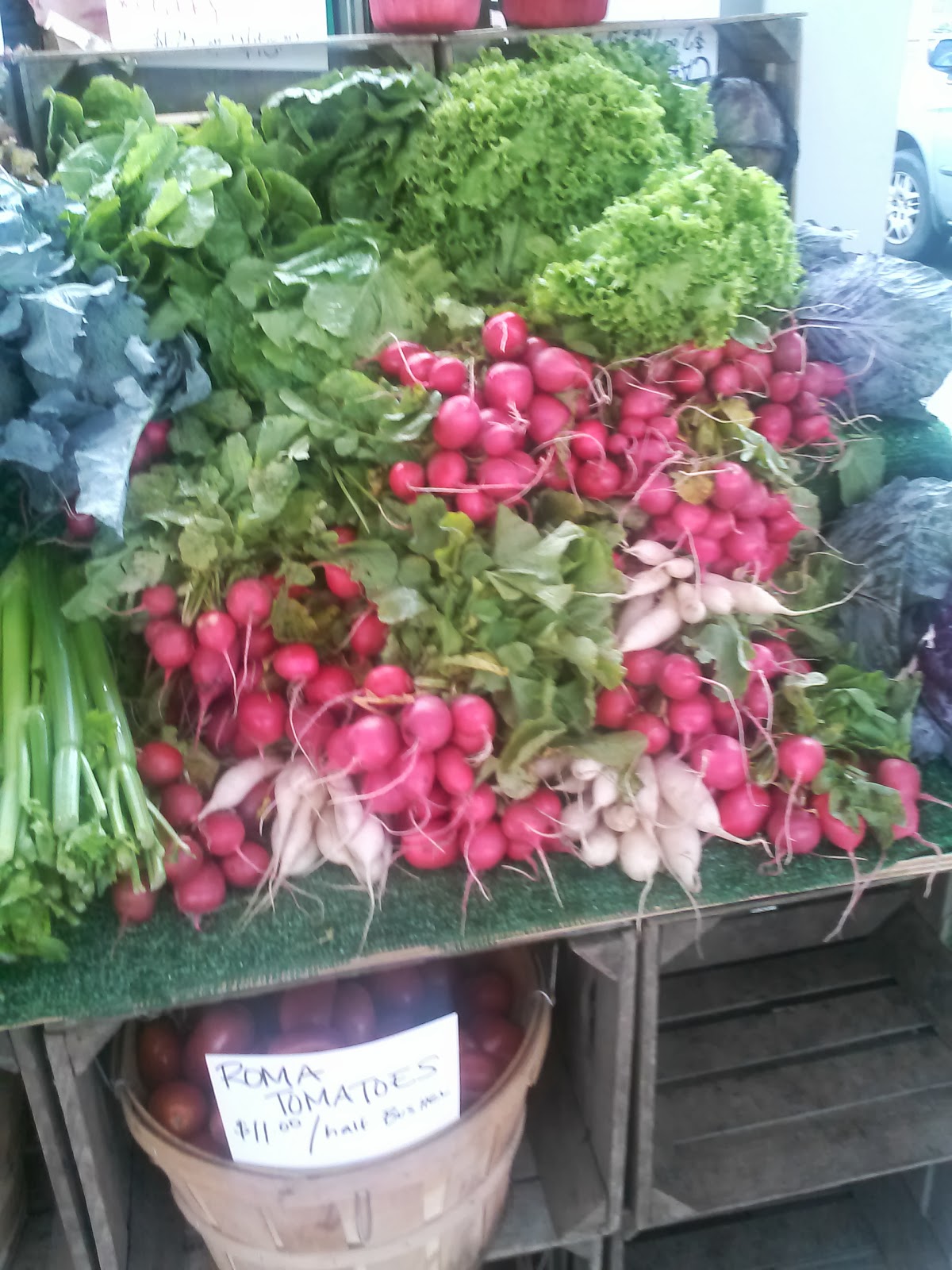 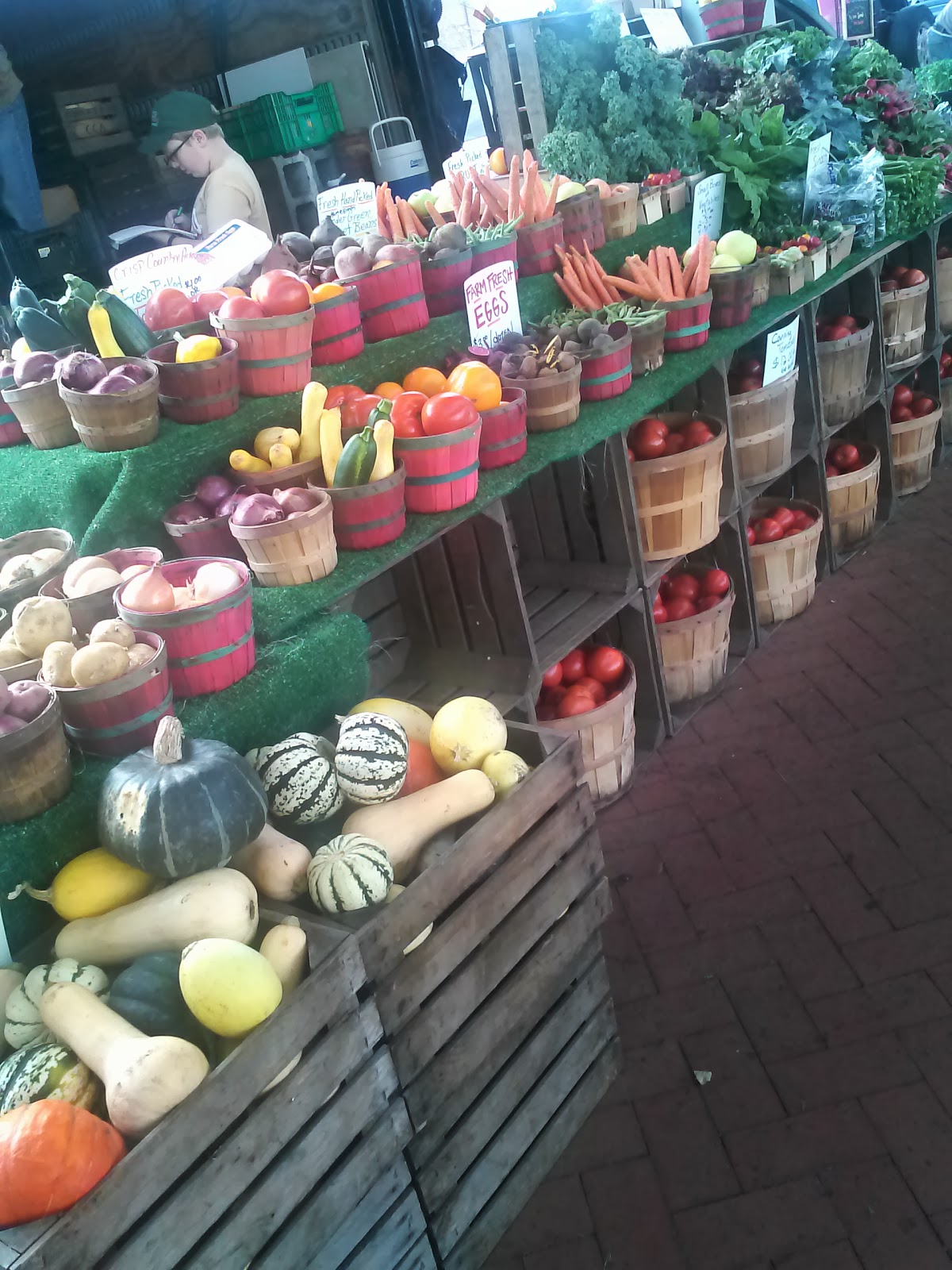 These are some pictures from last year's market.  Obviously, the canning tomatoes and winter squash aren't in yet!  That's Jacob in the last picture.  He's pretty much taken over the operation.  He's incredibly into this job, and even created a farm market in his Minecraft world.  Crazy boy.

Finally, I feel like I am adjusting to the new normal, just like new moms do.  Life hasn't gotten less busy; I have just realized that it probably won't for many years, so I might as well get used to it and get on with life. Part of that means making time to cook, try new recipes, make some progress on the old house, and share what I learn through it all on this blog.

Since the farm market has been such a big part of our lives for the last year, I have been experimenting with all of the vegetables that we sell, fresh from the farm.  I have learned a lot about seasonal cooking, figured out how to adjust certain recipes to include more veggies, and found out that some vegetables that I thought I didn't like, just needed to be prepared in a certain way in order for me to love them.  So for some time now, I have wanted to share some of my experiments here.

Do you have any idea how many vegetables can be stuffed?  Cabbage, peppers, potatoes, tomatoes, squash, eggplant....and zucchini!  I want to try them all.  Since zucchini is the gift that keeps on giving, I thought I would start there.

When I want to find a recipe, I usually just search online.  Sometimes that is helpful, but if I have an idea that I just need to round out, I have less luck.  That was the case here.  Most every recipe I found was for a tomato based stuffing.  They sounded good, but I would rather use that sort of stuffing with peppers. I wanted something that was maybe a little spicy, maybe a little creamy to go with the sort of blank slate of zucchini.  I was out of luck this time, so it meant flying blind.

Working without a map is a fairly new thing for me.  I have had enough successes in the last few years to lose my fear, but I was scarred for many years by my first attempt.  In my first year of marriage, I made what I can only describe as bad hamburger helper.  Yes.  I know that sounds redundant, but I mean it.  If hamburger helper made the entire surface of your mouth feel like it was coated with greasy cheese for a couple of hours after eating, that would perfectly describe that meal.  Blech.

Anyway, that's always in the back of my mind when I experiment in the kitchen.  But hey, that's what pizza delivery is for, right?

I wanted a main dish, not a side, which for our family means that the stuffing would contain meat.  No ground beef.  That would work with the more flavorful peppers, but bland zucchini needs more flavor.  Italian sausage was the way to go.  Of course, onions and garlic were in.  I would have gone for parmesan cheese, but I didn't have any in the house.  For filler, rice is always a good bet, but I happened to pick up a blend of Israeli couscous, lentils and split peas at the store the other day, so I went with that.  I wasn't sure what else to do, so I just got started by cooking up the meat and onions.  Once that was done, I started thinking about how to make it creamier without muting the flavor.  If I had time, I would have made up some homemade ricotta, but Jeff was already home, so I needed to think fast.  Cream cheese to the rescue. 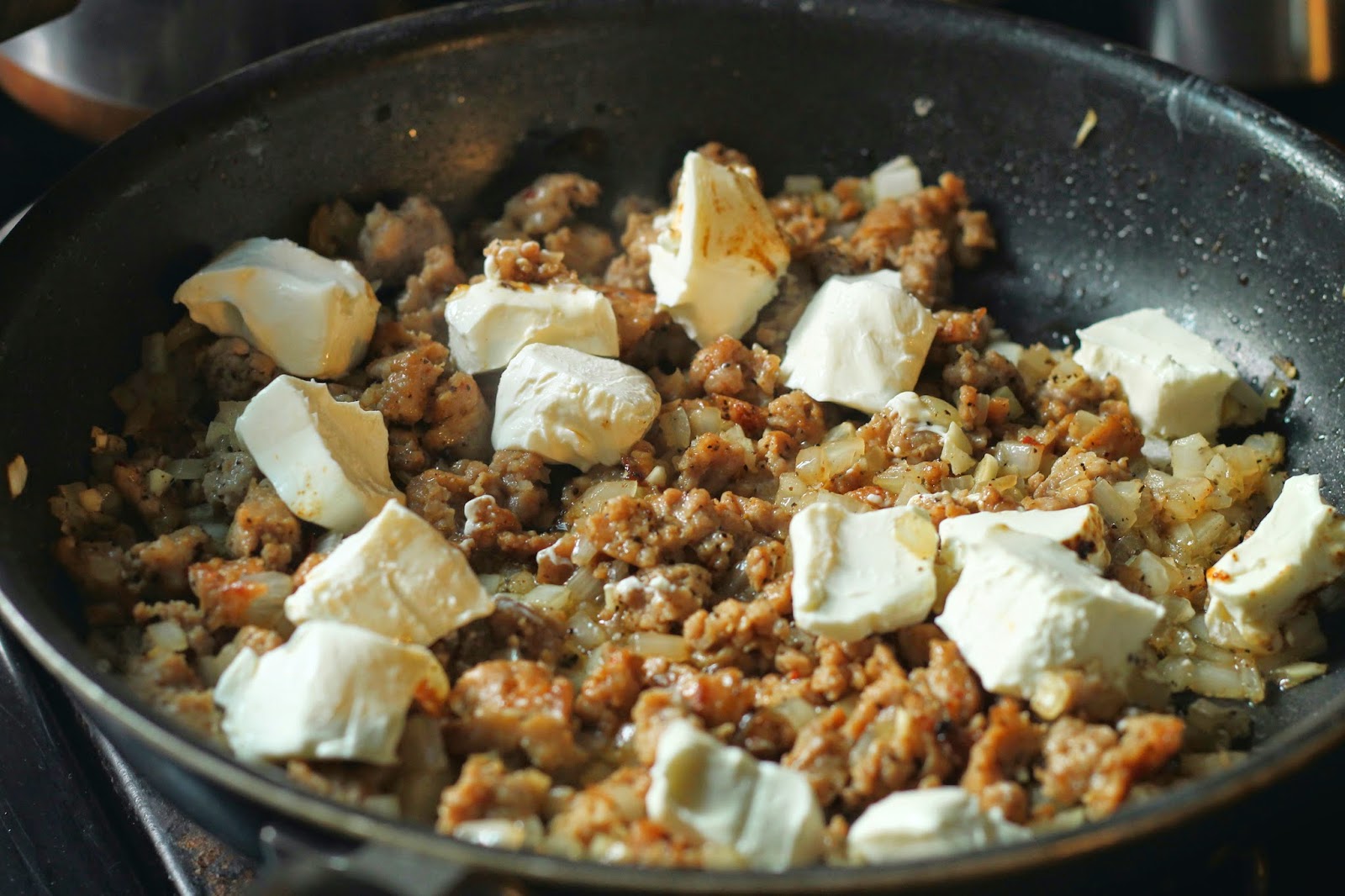 I cubed up about half of a block and let it soften on top of the cooked meat and onions.  I cooked the couscous, then stirred it up. It was yummy, but not very attractive.  It needed some color, so I grabbed a can of chopped tomatoes, drained it, and added most of the can to the filling. 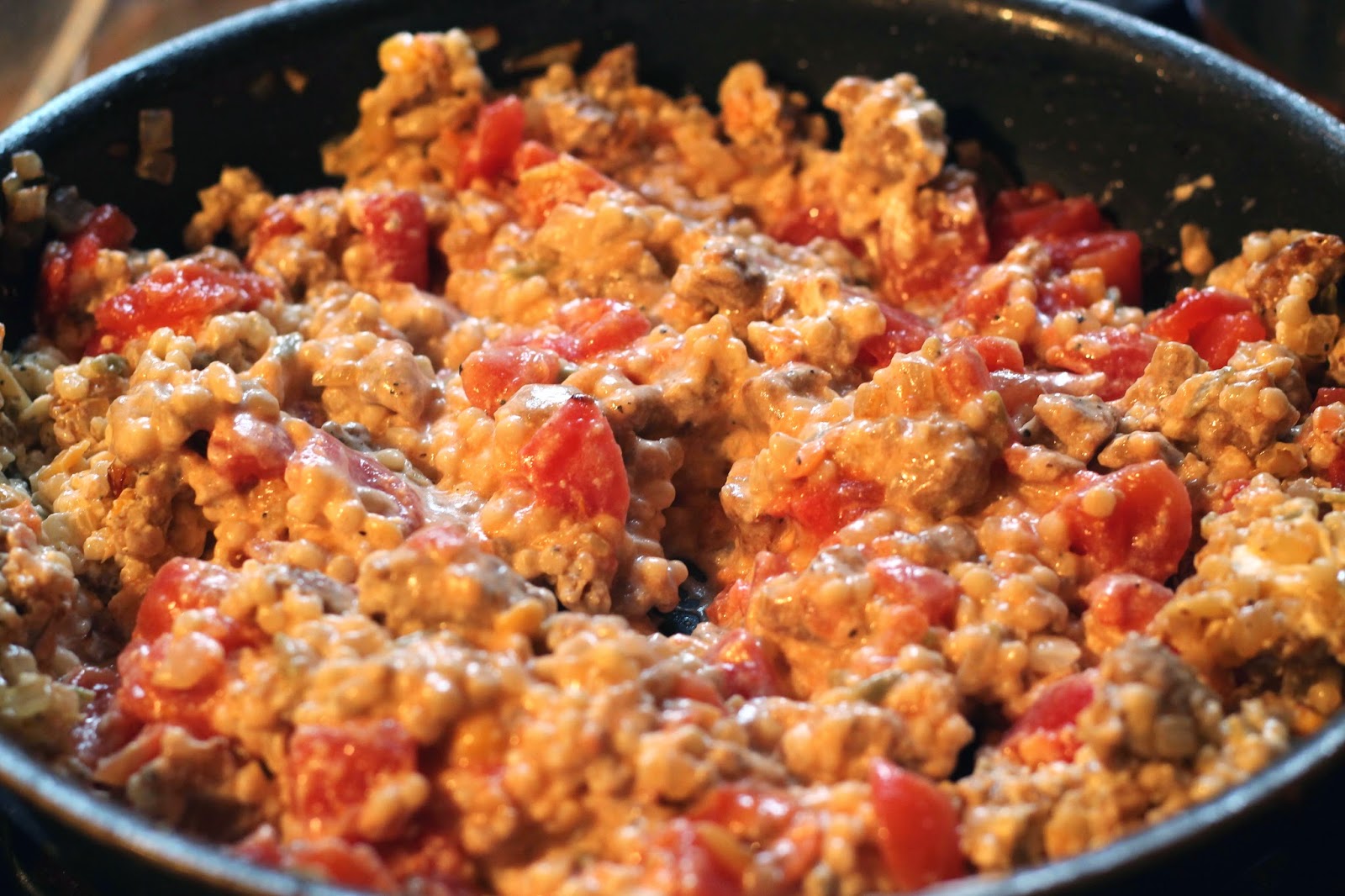 That's better.  I would have used fresh tomatoes, but the only two I had around were being saved to stuff another day.  And because I am a big fan of gooeyness, I diced up some fresh mozzarella cheese and stirred it into the filling, as well.

Next up, it was time to prep the zucchini.  I cut both ends off and sliced them in half lengthwise. Then I scooped the seeds out to make a sort of boat, but it's important to leave a good, thick wall on all sides. It doesn't have to be pretty.  Nobody will see the inside of the zucchini unless you perch the sheetpan with two of the finished zucchini boats still on it on the edge of the stove because you work in such a teeny tiny kitchen that there was literally no other place to put it, and it slips off of the stove and drops down to the floor, and the filling all slides right out.  But that is so unlikely, so I wouldn't worry about it.

Now, it's time to stuff. Really mound it up. 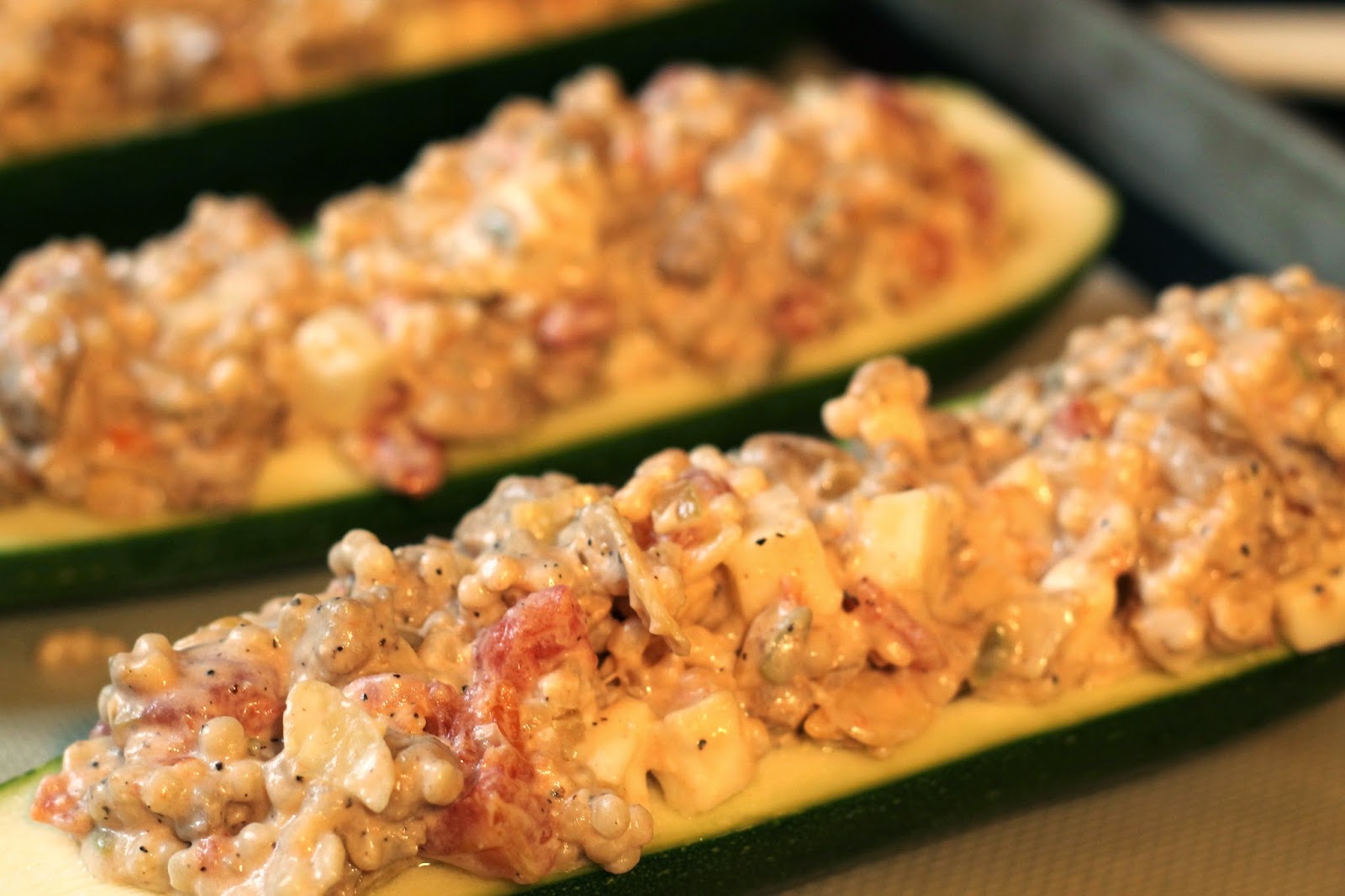 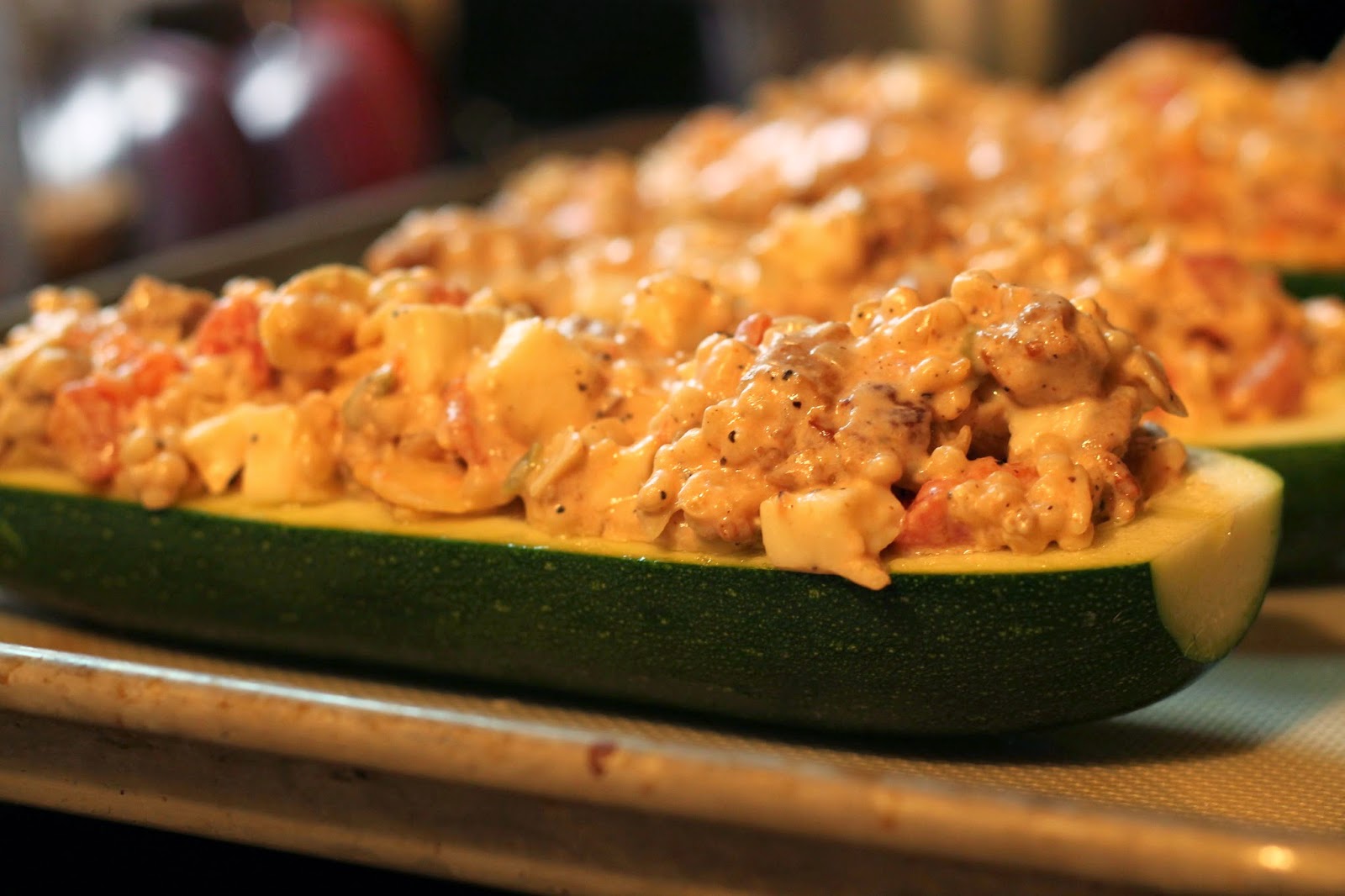 They're ready for the oven!

Partway through the baking time, I decided that they really could use a crunchy topping.  So I pulsed a couple of slices of bread in a food processor until they were crumbs, then sauteed them in a bit of butter until they were crunchy.  I threw in some minced Italian parsley from the garden for color.  Then, once the zucchini was tender, I sprinkled the topping over everything and popped them back into the oven until the crumbs were browned.

They were delicious!  I served them with potato leek soup.  I will get that recipe up later this week.  It was a perfect summer meal, and I managed to use lots of great items from the farm.

I hope you give it a try!  I'm off to hang some wallpaper in the mudroom (yup, still working on it), and heat up some leftover Peasant Soup for dinner.  It's another great Farm Market Find!
Posted by Katy England at 1:00 PM