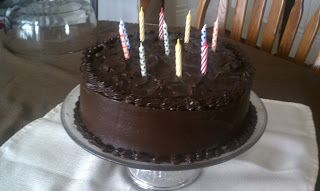 Today, my eldest child turns 11.  I know that I should say that I can't figure out where the years have gone, but I can't.  I know it should feel like he can't be more than 8 or 9 years old.  But the truth is, I have to keep reminding myself that he is only 11.  It seems like he should be at least 14 or 15.  How can he still be so young???

If you know Jacob, you understand.  If you don't, let me explain.  Jacob has always been ahead of his time.  He wasn't an easy infant, but by the time he was a year old, he became ideal.  Well, truth be told, I didn't realize how much of an angel he was, because he was my first.  I just thought I was an amazing parent.
[pause for laughter]
Nope.  Turns out that I am just blessed with an extraordinary kid.  Not only has he always been very obedient, but we found out that he's really smart once he was in school.  He even skipped a grade, which means that he started middle school before he turned 11, and he's STILL taking advanced math. Not only is he smart, he's pretty wise.  He often says things that are simply beyond his years.  He gets things that I didn't get until I was at least in my late 20's.  In fact, when he actually acts his age, I find it incredibly charming.  He's quite a kid.  He's not perfect, of course.  There are issues that he needs to work on, like responsibility.  But really, if my kid is just now turning 11 and I am able to focus almost exclusively on getting him to do all of his chores without being reminded, well, I can't complain.

See?  He's not your average 11 year old.  Which is why I sometimes forget.

But I'd better stop bragging, because he reads my blog, and I don't want him to get a big head.

I love birthdays.  I try to make them special.  It's the one day of the year for each person that is purely their day.  I don't go crazy.....we have limited means, so we get a few gifts, and maybe one of them will be on the major side.  This year Jacob has been trying to save for a tablet.  So Grandma is chipping in toward that, and we are paying half of whatever is left to pay.  He has most of his share saved up already, but he hasn't yet found the deal that he is looking for.  Fortunately, he is not looking at the iPad.  Phew.

Anyway, we don't go all out financially, but we do set the evening aside, let the birthday boy or girl pick dinner, and have cake and ice cream afterwards, followed by opening gifts.  On their 5th and 10th birthdays, we take them to Chuck E. Cheese.  Parties on 5th, 13th and 16th.  And who knows what else.  We also try....try, I say....to do something special on or around each birthday.  On the weekend nearest Jacob's birthday, we try to go to a cider mill.  On Nora's birthday, I try to get to a greenhouse to pick out some flowers, including sweet peas.  Max's birthday is a little harder.  We went blueberry picking this past year, and he liked it, so maybe that'll become a thing.  Obviously, it doesn't have to be a big deal.  It's just a tradition that they can connect to their day.

But every year, at least so far, I make a special cake.  There have been a few exceptions.  One year Nora got a glimpse of a pretty cake in the case at the D&W bakery and desperately wanted it, and it happened to be her 5th birthday, when I was throwing her a surprise tea party.  Lots of cooking and baking was involved in the party (on a different day), so getting out of baking the big cake was a win/win.  Most years, I am spending at least two days baking and decorating.  I try to make a cake that suits their interests that year and/or reflects the special name that we call them.  Jacob is "pumpkin", Nora is "sweet pea" and Max is "peanut".....although I extended Max's name to "peanut butter" early on, and it stuck.

Jacob, a couple of years ago, requested a round chocolate cake with chocolate icing.  The previous year, I had made a space shuttle cake, since he wants to be an astronaut. 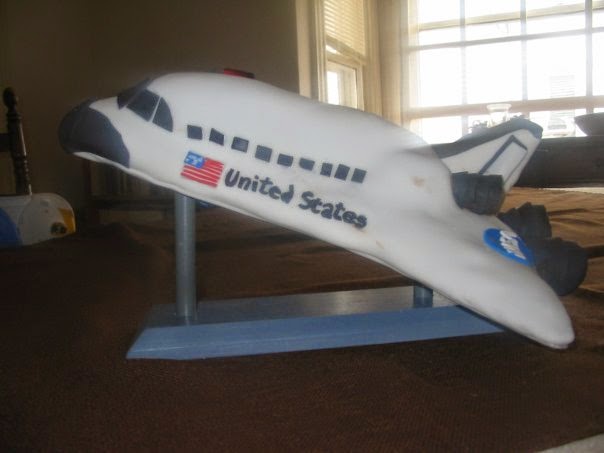 But he decided that he prefers a more symmetrical cake.  It bugged him that everybody got a different size and shape piece of the space shuttle, and with a round cake, everyone's slice is equal.  That's just the kind of kid he is.  It's all about math and science with him.  Me, I'm more of the creative type.  So I get around his exacting standards by at least throwing some canned pumpkin in the cake.  It actually makes it really moist without making it taste like pumpkin, but more importantly, it gives me some secret satisfaction.  Not so secret anymore, I guess.  Hi, Jacob!

So I don't have a fancy new cake to show you right now, but the important thing is that it is the cake that Jacob wants.  And to be honest, if I was making a space shuttle, I wouldn't have the time to write this post!  Here are some of the cakes that I have made in the past:

Jacob's 1st birthday happened to be on the eve of his cousin's wedding.  We had his party in a hotel room outside of Chicago, so I made sort of portable cakes that would survive the trip.

No pictures of my birthday cakes.  There's a very good reason for that.  I don't like cake much.  Plus, my birthday is 3 days before Christmas, and the last thing I want amid the Christmas cookies, candy, and other holiday treats, is leftover birthday cake.  We decided to get around that by just going out for dessert--whatever dessert we want, after dinner on my birthday.  That takes a little stress out of the week, since nobody has to bake me a cake (which, again, I don't really like much anyway), and best of all, NO LEFTOVERS!

What does your family do to make birthdays special?  Any special traditions that you want to share with the rest of us?
Posted by Katy England at 12:48 PM