Does chopping an onion make you crazy?  Are you tired of chasing the pieces around the cutting board, individually chopping each slice, or crying your eyes out when the fumes hit?

Well, I can't help you with the fumes.  I wear contacts most of the time, and that makes me nearly immune to the evil vapor.  But when I happen to be wearing my glasses, I cry so much I have to walk away and splash my eyes with water.  To some degree, keeping your mouth closed entirely while chopping onions can help, but only for a short time, and good luck with that if you have kids.

However, I can help you learn to dice an onion exactly to the size that you like, without frustration or gnashing of the teeth (again, I can't help much with the weeping).

Okay, so everyone has seen the way that the t.v. chefs chop an onion, right?  Cut off the tip, peel it, and slice it in half , through the intact root. 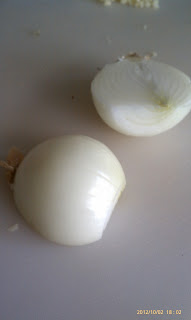 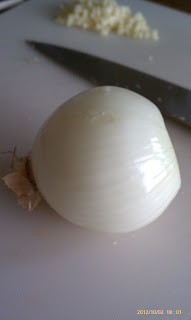 I do that, too.  After that, though, I differ.  Most of them make vertical slices from side to side, across each half of the onion.  Then they make vertical slices from the tip to the root end of the onion, basically making a checkerboard pattern if you look at it from the tip end.  The problem with this is twofold.  First, the onion is round, not square, so a checkerboard will result in a wedge around the curve of the onion on each side, which, when sliced, gives you larger pieces than the rest.  This bugs me.  Also, slicing into the onion horizontally from the cut tip end basically pushes the onion petals back toward the root, making it difficult, if not dangerous to make those cuts with any but the sharpest knife.  Because it is more difficult, it becomes almost impossible to achieve a fine dice.  I learned my technique from Alton Brown, though it was many years ago, so I might have changed a few things over the years.

First, make one vertical slice down the center of the onion half, from the tip, almost to the root, though you want to leave the root intact until the very end. 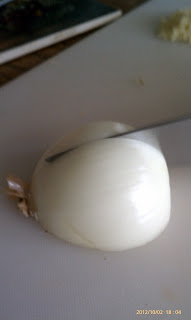 Then make several angled cuts, starting on the far side.  Start at the base of the knife, and gently pull the knife as it slices inward, aiming for the base of that first center cut, just missing the root with the tip of your knife. 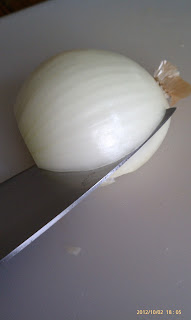 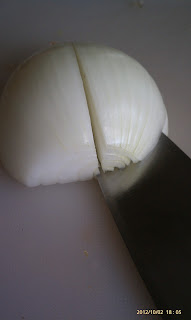 And continue until you have many wedges, of any thickness that you desire, still attached by the root.  The onion in this picture will produce a fine dice.  Cut thicker wedges for a medium dice, and wide wedges for a large dice.  See?  It's so adaptable! 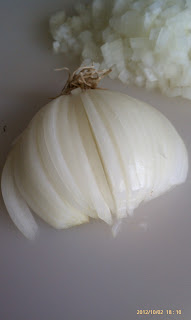 And finally, slice across those wedges, again, as thickly as you like.  Or, if you want to make strips of onion for fajitas or onion soup, you can just cut the root off and leave the wedges long.  Did you know that wedges cut like this will hold their shape much better when you caramelize onions, than if you cut half rings, which tend to turn into onion jam?  It has something to do with the structure of the onion, but I'm not Alton Brown.  I only learn from him. 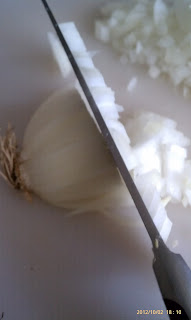 Because the onion consists of petals, the individual pieces fall apart and you have easy minced onion.  This may sound complicated, but it really isn't.  It takes a few minutes of practice, and you have it.  As silly as it sounds, this may have been the one skill that made me really enjoy cooking.  I use onion in practically everything, and I always found it to be so difficult to dice.  Having a good knife and knowing how to make the onion behave has turned a pain in the neck step into one that I barely need to think about. 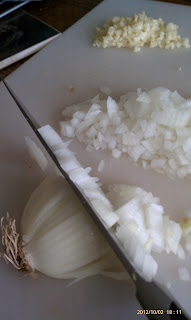