Well, we have been making a bit of progress in our mud room (to be).  The wall that will be opposite the cupboard and locker wall is primed and ready for finishing.  We bought the slate tile for the floor (as well as enough for the floor in our front entryway that has been stripped to studs for....has it been 3 or 4 years?  Eh...we'll get to that eventually).  And I finally worked up the nerve to knock out a project that scared me.

I am a perfectionist, see.

Those of you who have been to my house may be laughing right now.  That's okay.  You would definitely not walk in my front door and exclaim, "I've discovered perfection!"  At least not yet.  Not for a good 20 years or so.  But THEN.  Oh, then, this house will be perfect.

Does "tongue-in-cheek" translate in print?

This is why I like things that are 100 years old.  If I tried to stay with every trend, I would just be getting around to shabby chic.  So I go with old, because even if this takes me 20 years, it'll be okay.  Old will still be old.

Cluttered will still be cluttered, too.  But let's think positive and assume that I will grow in my housekeeping skills as these 20 years progress.

So anyway, I am not the good kind of perfectionist.  I have a friend who is the good kind.  Her house is perfectly clean and updated, her kids are dressed perfectly, her daughter's hair is perfect, and she's always improving her house.  She likes things perfect, and so she makes them that way.  Oh, to be like her.  See, I like things perfect, too. But I get overwhelmed by the enormity of the task and worried that it won't turn out like it should.  So I hide.  I ignore.  I find something, anything else to do.  And while I recognized this about myself around two years ago (as I was finishing up one of those projects and realizing that it really hadn't been all that difficult and that I was happy with the result), it hasn't seemed to help me to tackle a project head-on.

This project may have changed that.

I have never been so happy with the outcome of an idea that had floated around in my head for some time.  There's always something to regret, right?  Not this time.

This time, it turned out better than I expected.

I took a chance.  I wanted to do something on the back wall of the cupboards that we are building.  The cupboards will have glass doors, so I thought it would be nice to make the inside a little prettier.  I saw an idea on a friend's blog that I liked, but the exact design was a little too modern for my needs.  It was perfect for her, but she lives in one of those houses that was built after asbestos and lead paint went out of style.  I want the things that we add to the house to blend in with what is already there, at least to the degree that my budget will allow.  I had a thought in my head, but I'm not the artist type who can really see the big picture and know that it will work.  I could only see a small snippet. But hey, it was worth a try.  So I sketched the first segment. 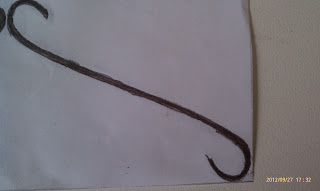 Then I attempted to sketch a mirror image.  Pretty close, but not exact.  Only then did I get the idea to scan the design that I had so far into the computer and create a mirror image that way.  Of course, I had absolutely no idea how to do that, but it seemed like something that should be possible.  So I did what any nearly 40 year old woman does when she needs help with the computer.  I called my 10 year old son.  He said he didn't know how to do it.  And then he whipped it out in about 10 minutes. 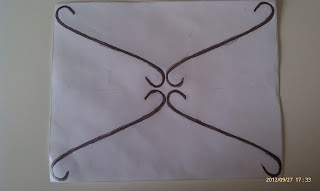 That was nearly a month ago.  My perfectionism kicked in and I was paralyzed by the fear that it wouldn't look the way that I wanted it to look.  However, since my goal is to get the mud room finished before the snow flies, I finally felt the pressure to get this done.  It could always be painted over, right?

I used a technique that I learned from the same blog.  Kind of brilliant in its simplicity.  I turned the design pattern over and scribbled over the back side of it with pencil. 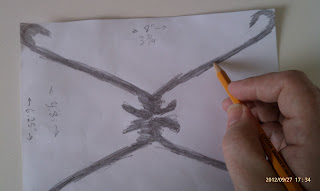 I also took measurements.  I measured the length and width of the design, and determined how many repeats I would be able to draw on my board, both down and across.  That enabled me to pretty much center the design without being too fussy.  Then I marked little dots in both directions on the board at the right intervals to help guide me as I attempted to keep the pattern straight. 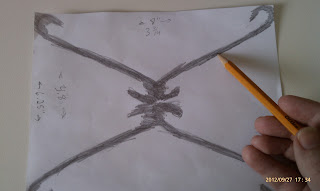 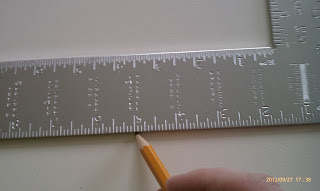 I lined a carpenters square up with each set of dots, and placed the pattern in the corner, right side up.  Once I was certain that it was where it should be, I traced the pattern. 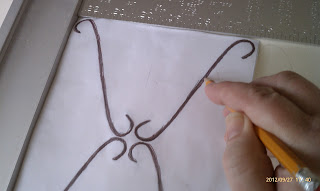 The pencil lead that I scribbled on the back side of the pattern transfered over to the board!  This is such a great technique.  I wish I had known about it before I used an exacto knife to meticulously cut all of Phillipians 4:8 out of printer paper to use as a makeshift stencil for my living room wall.  That was so much harder than it needed to be! 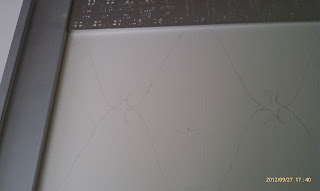 I just kept repeating the pattern, all the way across, just lining up both the carpenter's square and the pattern.  There were times that I just ignored the square, because it looked like the pattern was getting off.  I suppose this was due to the handmade pattern being a little "off".  But it worked out.  Every once in a while, I had to rescribble the back of the pattern. 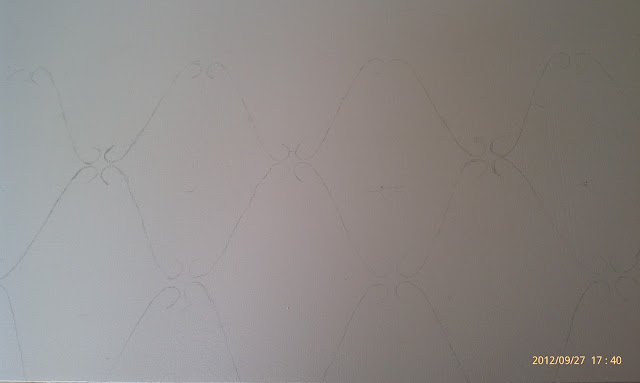 Finally, the time came to paint.  I figured that the hard part was done.  I was wrong!  Oh, it was my own fault.  I didn't think it through.  I had the tiny artist's paint brush, but it doesn't really work so well with latex paint + primer.  Duh.  It was so thick that I couldn't paint a complete line without refilling the paint brush about three times.  This meant that the paint line would get thin, I would have to stop to refill, and then I restarted it, which often caused sort of a lumpy line.  On top of that, I used about 2 tablespoons of paint from a quart size can.  Doh!  So, if you decide to do anything like this, I recommend that you head over to Hobby Lobby and buy a small jar of paint that is actually intended to be used with those tiny little brushes.  I'm pretty sure it will be less frustrating.

As I was leaning over the board, inches away from those lines, I became discouraged at the lumpiness and imperfection.  However, once I stepped away for a break and came back, I was able to look at it from a couple of feet away.  The imperfections were hard to pick out!  The pattern had begun to take shape, and I was able to see the big picture.  That's a lesson that I plan to carry with me to all future projects. I liked it!  That gave me the boost I needed to carry on and get it done.  And once I was done, and could look at the whole thing, the idea that had been bouncing around in my head, now in front of my eyes, I LOVED IT!

It suddenly looked like fancy chain link, or that sort of bronze chicken wire that you see in the door panel of some antique pie safe.  It looked OLD!  It looked perfect. 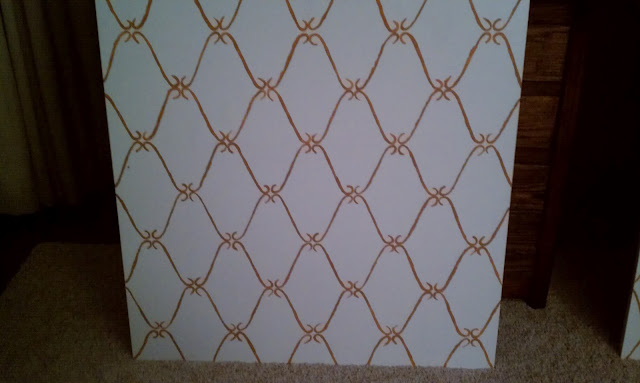 Truthfully, this house will never be perfect.  It's been too well lived in.  Too many times, various owners have desired to make this house their home, and laid yet another layer of paint or wallpaper on the walls, thus making it quite impossible to ever paint a straight line between the ceiling and the wall.  And it has settled.  It was built well before laser levels.  No corner is a perfect 90 degrees, and no wall is perfectly flat. All of the imperfections of the house have given me license to accept imperfection in any additions that I make to the house.  They fit right in.  In a way, in this house, imperfect is perfect.  And while I can't make this house perfect, I can make it mine.  It just takes some guts.

Are there any projects that you have been putting off because you were too scared to tackle them?  I'm not just talking about home improvement.  Is there a story you've been wanting to write?  A complicated recipe you've wanted to try?  A party you've wanted to throw?  Let me know if you are ready to put them back at the top of the list!

Oh, and....if you can think of any good ideas for using up a quart of high gloss Spiced Chai primer + paint, please leave a comment below.